If you stayed up last night, here’s a reminder of the highlights of the night: my General Election Cartoons 2017. And if you didn’t, this is what you missed… 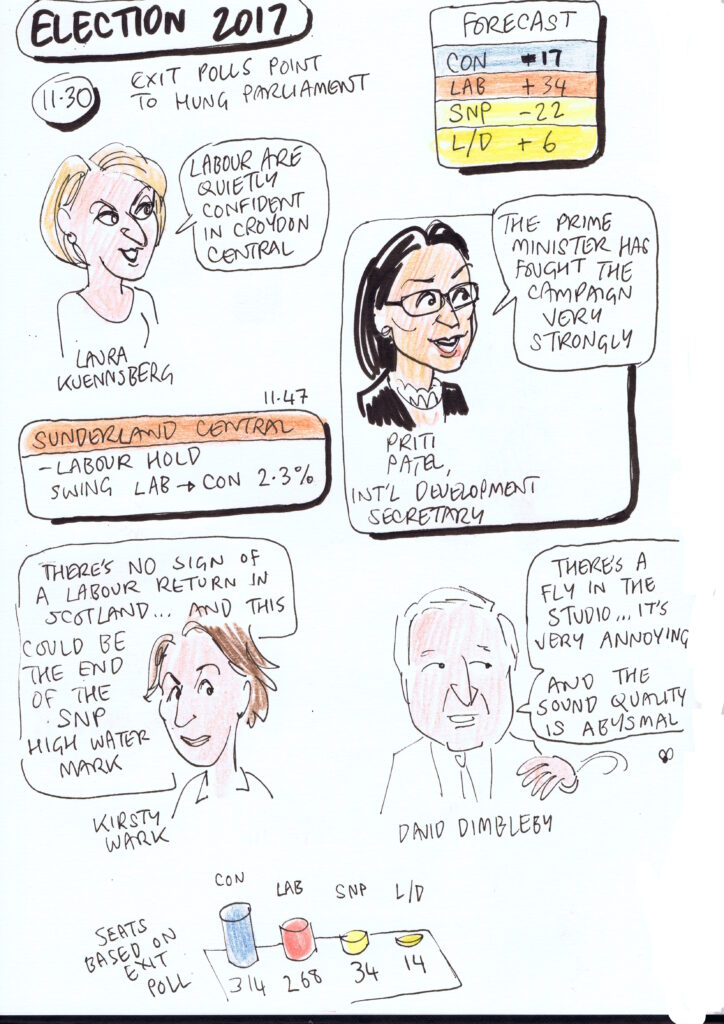 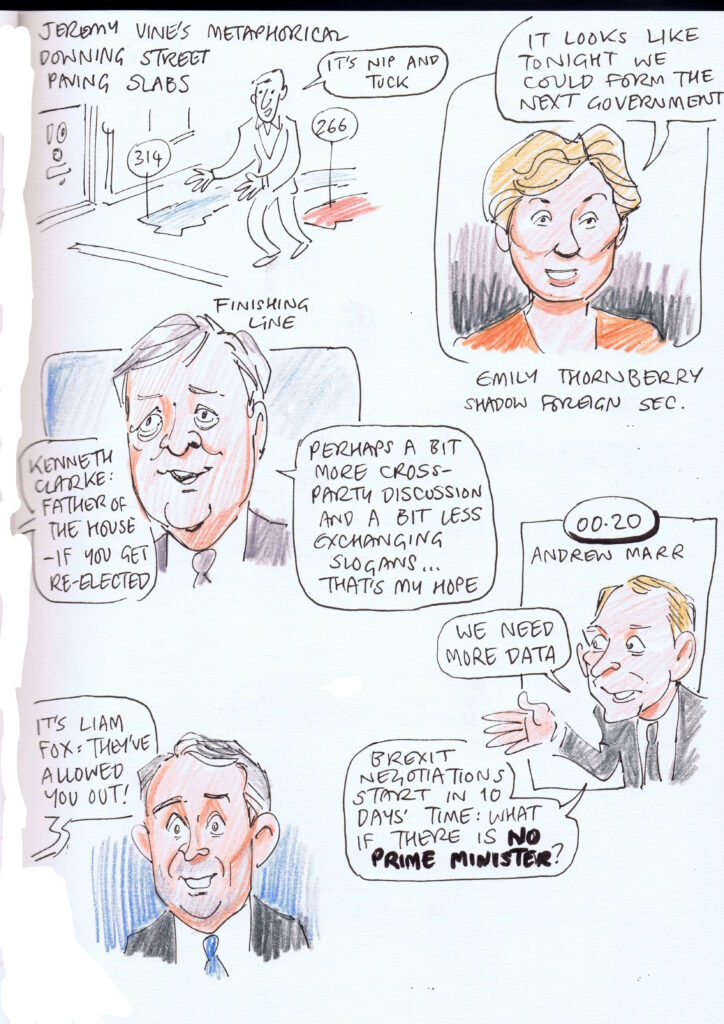 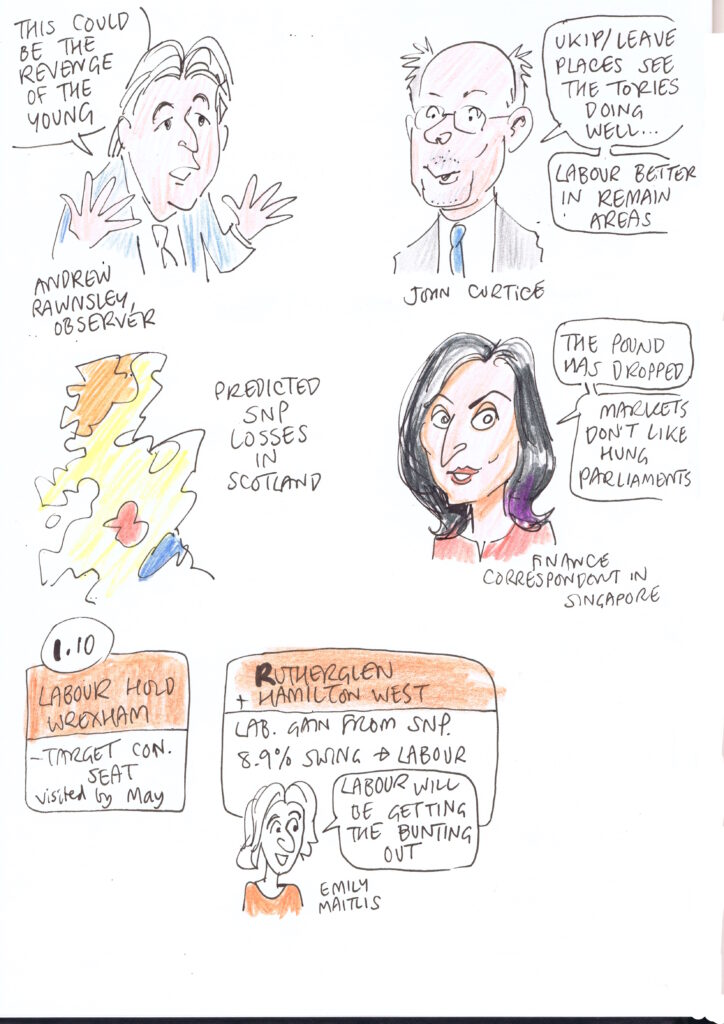 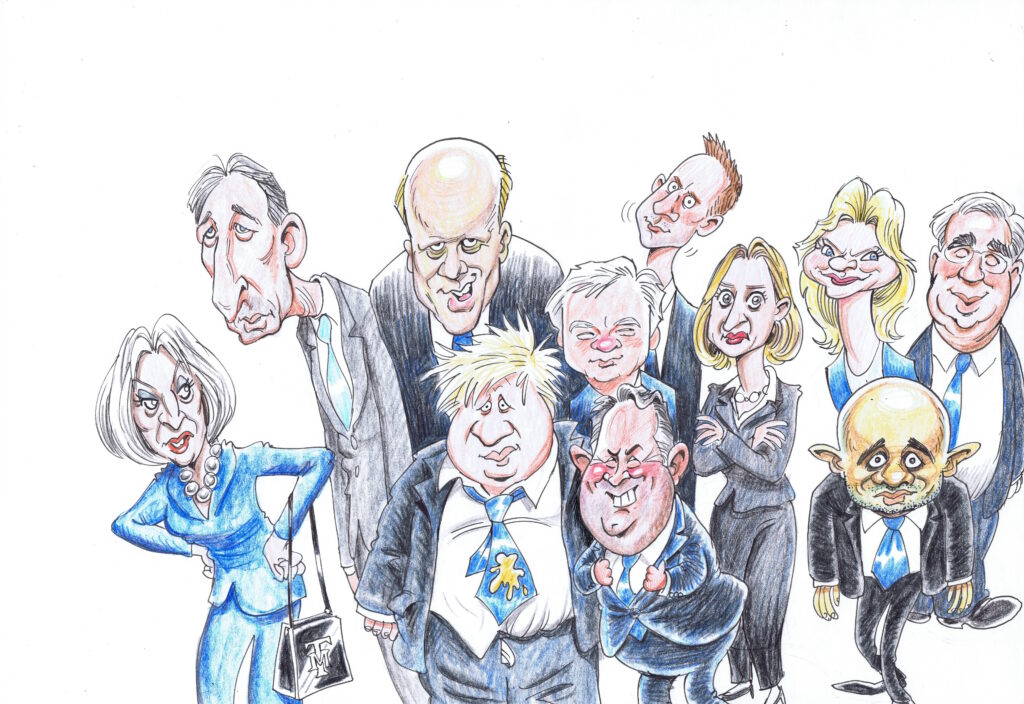 Watching Philip Hammond’s Autumn Statement, I realised that I haven’t yet drawn all of Theresa May’s cabinet. They are such a disparate looking bunch that I thought this would be an enjoyable project. In case they haven’t impressed you with the full force of their personalities, maybe I should introduce them.

From the left they are:

Politics move so fast, I might need to update these fairly soon. I think my next project will be Jeremy Corbyn’s shadow cabinet. Watch this space!

Election night is a great subject for graphic recording and I always like to keep a visual record of  the big event. It’s an opportunity to refine caricatures of lots of politicians as well as presenting a challenge of how to represent all the statistics in a clear and friendly way. The following images take us from 11pm till 3.30am when tiredness got the better of me! 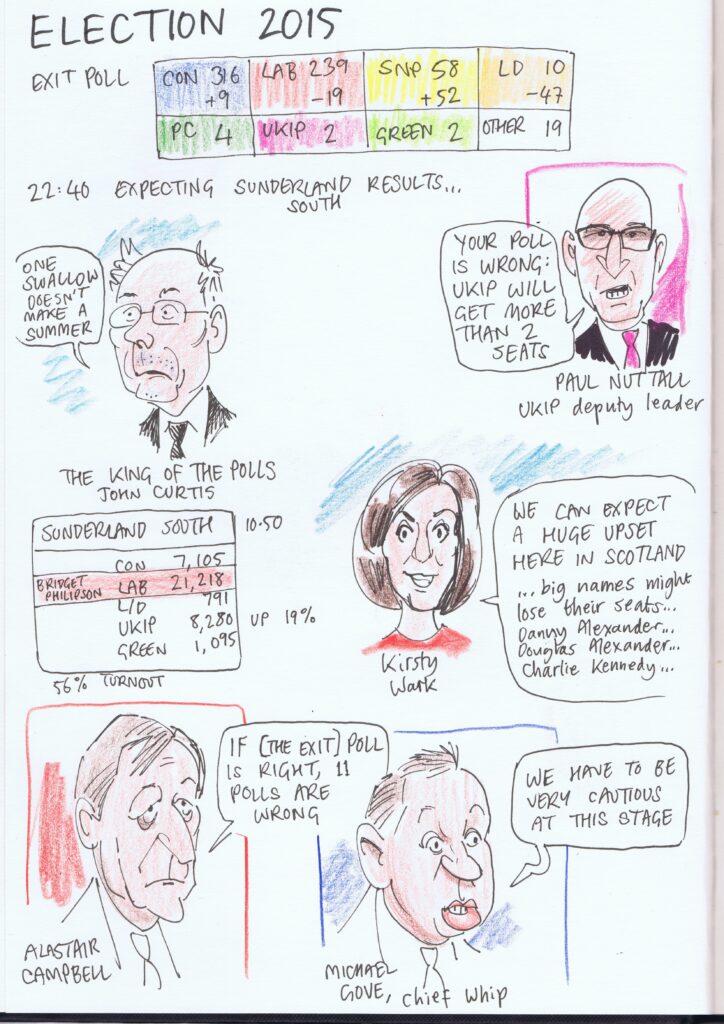 The night began with an exit poll that, contrary to previous polls, gave the Tories a clear majority. Alastair Campbell’s morose expression reflects this, though to be honest he’s not the smiliest of politicos. 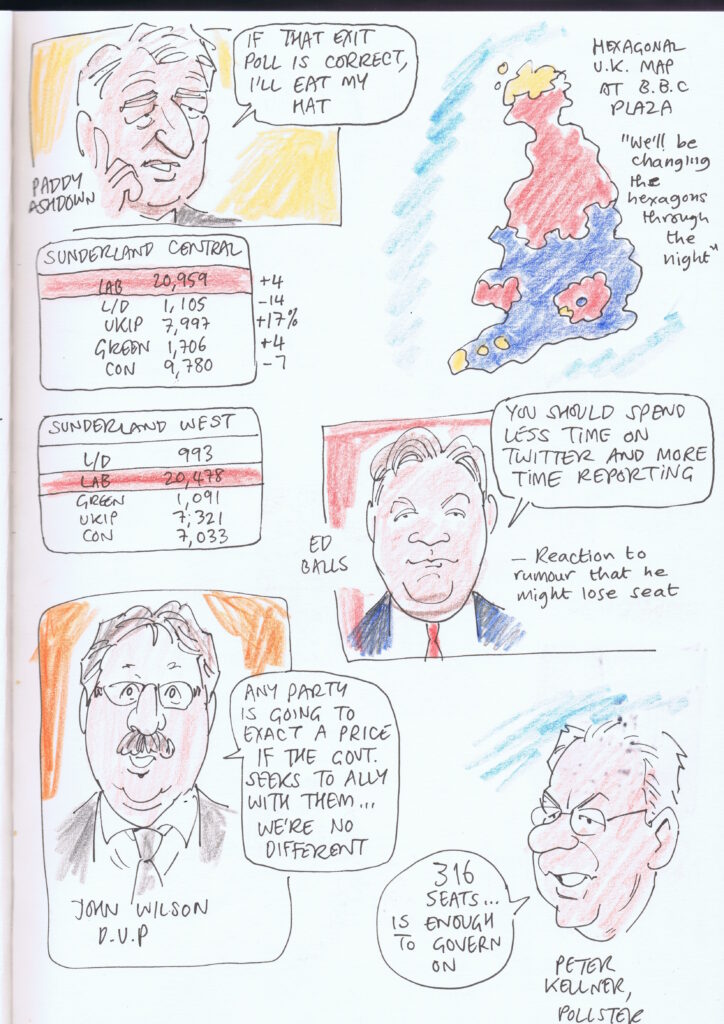 Lord Ashdown made the boldest promise of the night – followed immediately by his terms and conditions. He would only eat a marzipan hat (marzipan being a good Lib Dem yellow, presumably). And if Ed Balls was nervous, he hid it well. 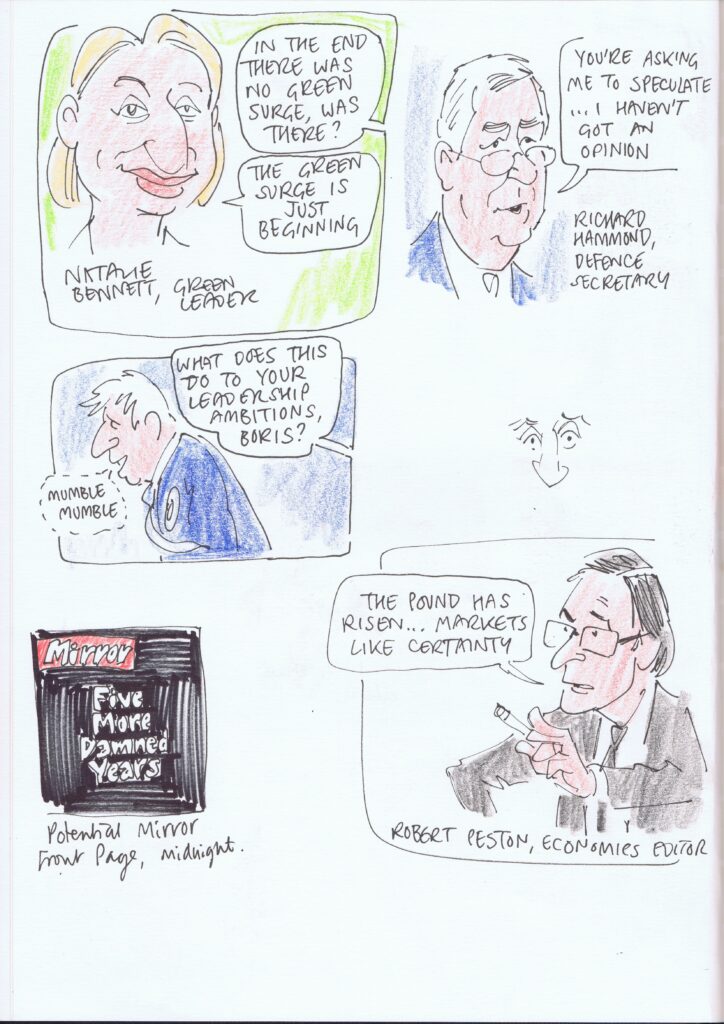 Boris Johnson wasn’t much in evidence, which was a pity, as he’s catnip for caricaturists. And the Mirror was first off the block to voice a Labour lament. You can tell it’s getting late by this point, as I’ve renamed Michael Fallon, the Defence Secretary, as Richard Hammond, the Top Gear presenter. Well, tanks, cars, all the same thing really isn’t it?

I don’t know the name of the Midlands correspondent, but he had the look of an American Eagle. Alan Johnson looked surprisingly cheerful, given the way the declarations were going at this stage. Maybe he was congratulating himself for not standing as Labour leader when Gordon Brown stood down. 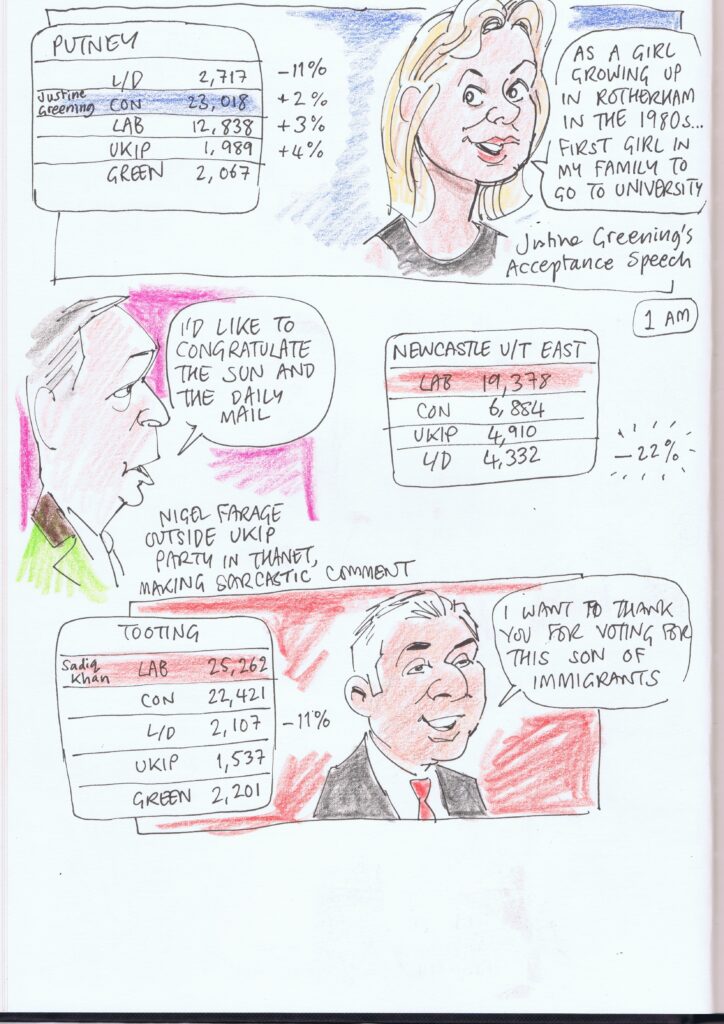 Both Justine Greening and Sadiq Khan gave very personal thanks to their constituents. Nigel Farage was caught in more sarcastic mode, blaming the tabloids for making a tactical mistake in telling their readers that UKIP’s threat was to the Tories. 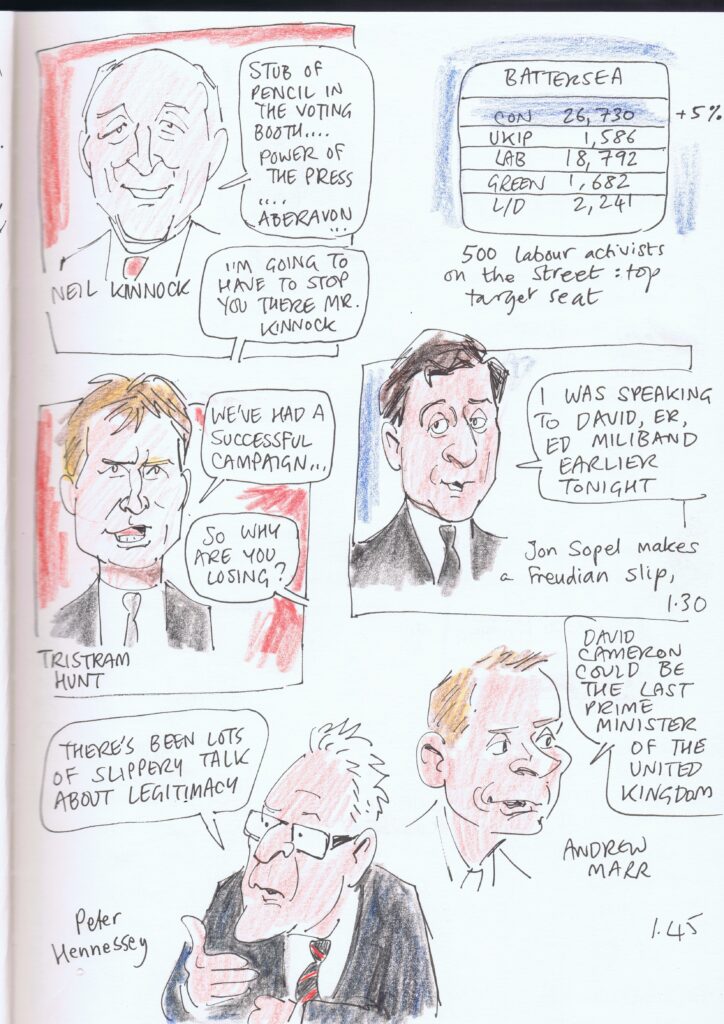 Lord Kinnock is famous for being eloquent at the drop of a hat, and he didn’t disappoint here. I couldn’t keep up! The constitutional historian Peter Hennessey had a slower delivery, and so receives a more finished picture. 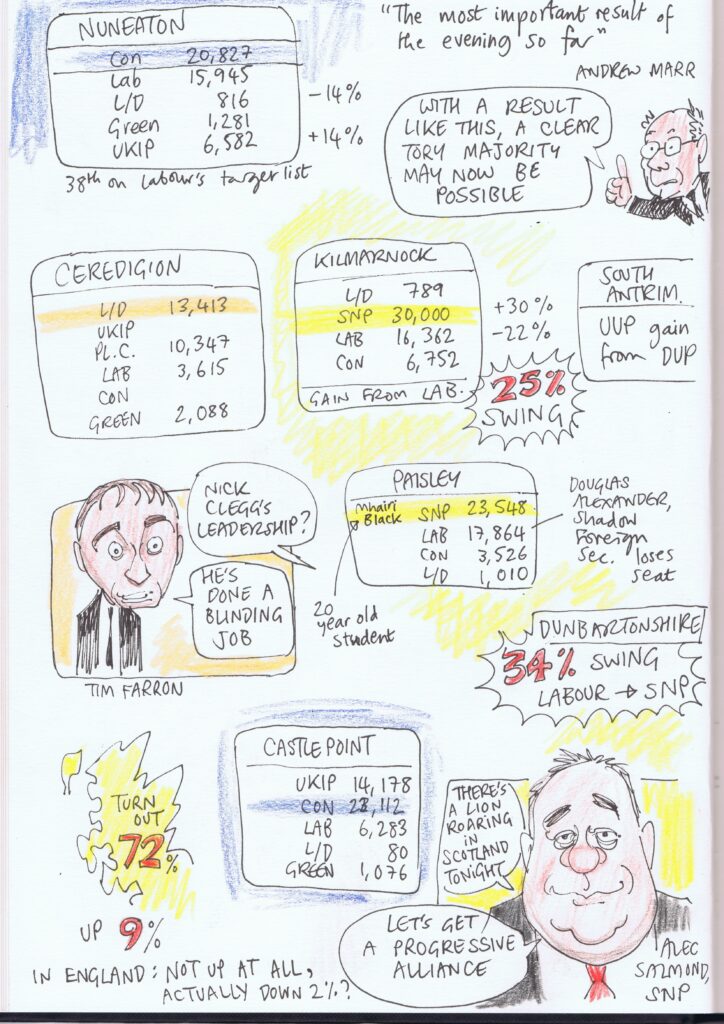 The Scottish votes were coming in thick and fast at this stage, and polls that nobody thought possible became a reality. With massive swings to the SNP, the question was being asked if the other parties would retain ANY seats north of the border. Alec Salmond was visibly purring, while in the Lake District Tim Farron gave a somewhat over-optimistic spin to the unfolding Lib Dem wipeout. 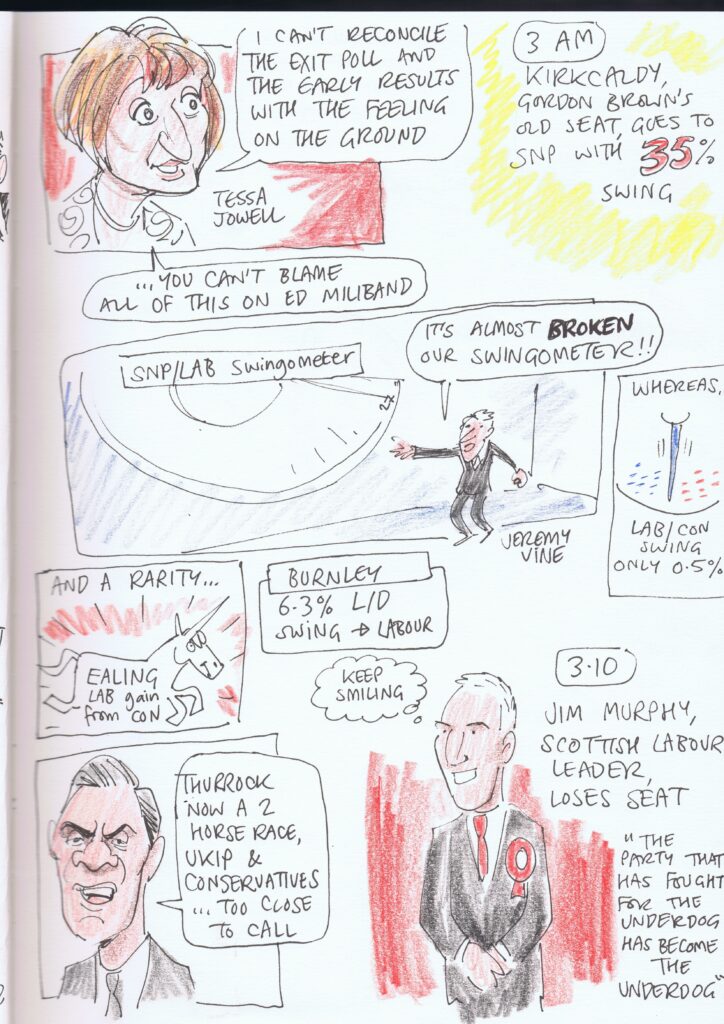 Ah, the dear old Swingometer: no BBC election coverage is complete without it. The unicorn represents one of the rare Labour gains from the Conservatives. Most of the action in London was in terms of Lib Dem seats being taken by the two larger parties. Jim Murphy gave a dignified adieu, having led Labour to their worst Scottish performance ever. 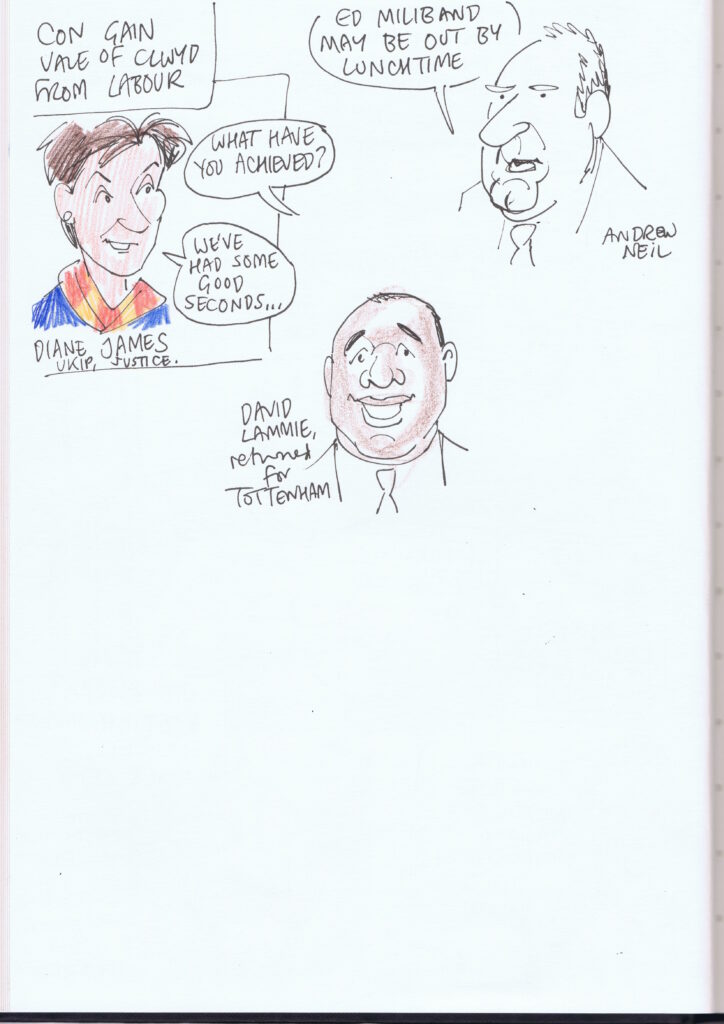 I know, that’s a lousy caricature of Andrew Neil! This was the point where my bed beckoned. By now, it was all but inevitable that David Cameron would be Prime Minister with a large enough majority to dispense with the Liberal Democrats, and that Ed Miliband’s giant stone, carved with Labour pledges, would not be installed in the Downing Street garden. 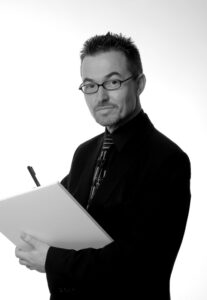 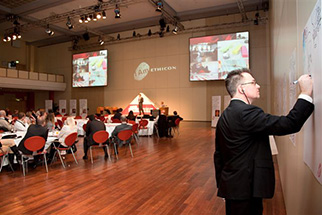 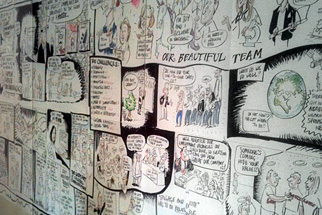 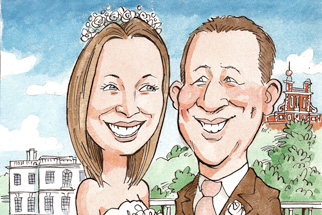